Remote Desktop Connection Manager is a great tool from Microsoft which enables you to keep track of all your RDP sessions and targets in a nice GUI. One of the things it’s lacking though, is some sort of Active Directory connection that allows you to import all your server objects directly, and not manually add/remove the serves as your infrastructure changes over time.

In an attempt to bridge that gap, I’ve made a very small PowerShell script that queries your Active Directory for server objects and dumps their names into a text file that you can import into RDCMan. This is a very simple solution, but works great in my environment.

In short, replace the path in line 11, and you should be able to run the script. It will then create a file called servers-{current-date}.txt in the path you have specified. This is a simple text file with one server defined on each line.

This file can then be imported into RDCMan by going to the Edit menu and select Import Servers. This brings up the Import Servers dialog box where you can browse to the file that the PowerShell script created. Click on the Import Button and all your servers should now be listed in RDCMan. The next time you need to update, delete the existing servers, re-run the PowerShell script and import again. 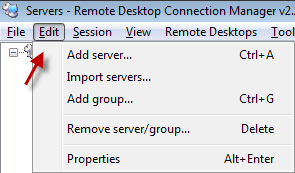 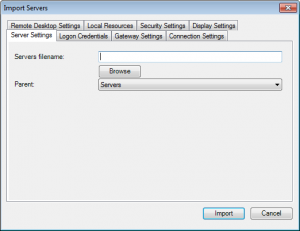 While this isn’t a fully automated solution, and I really wish RDCMan could do this for you by querying AD directly and finding new servers and removing the ones that are no longer present and so on, it is a quick way to get your current servers into RDCMan without manually creating each and every entry.

After I initially posted this, Jan Egil Ring, pointed me to his solution which is a bit more elaborate. Have a look at his solution «Dynamic Remote Desktop Connection Manager connection list», which is how it really should be done…

Christian Mohn is a Senior Solutions Architect and Tech Lead SDDC for Proact in Norway.