A little while ago I fitted a small 64GB SSD disk to my HP MicroServer just to have a quick look at the new vSphere 5 feature Swap to Host Cache, where vSphere 5 reclaims memory by storing the swapped out pages in the host cache on a solid-state drive. Naturally, this is a lot faster than swapping to non-SSD storage, but you will still see a performance hit when this happens. For more details on Swap to Host Cache, have a look at Swap to host cache aka swap to SSD? by Duncan Epping.

Now, in my miniscule home lab setting it’s somewhat hard to get some real tangible performance metrics, so my little experiment is non-scientific and only meant to illustrate how swap to host cache gone wild would look in a real world environment.

After installing the SSD drive, and configuring Swap to Host Cache, I created two VMs ingeniously called hostcacheA and hostcacheB. Both were configured with 14GB of memory, which should nicely overload my host that has a whopping 8GB of memory in total. 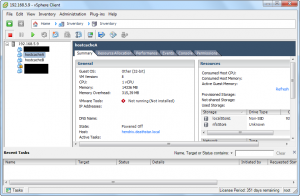 To make sure of this, I downloaded the latest ISO version of Memtest86+ and connected it to the empty VMs. 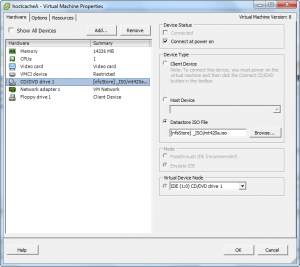 When starting the VMs, they immediately started testing their available memory and sure enough, they started eating into the host cache. 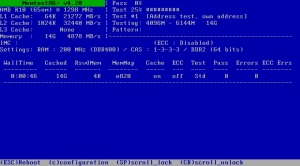 As you can see from the screenshot below, the longer the memtest ran the more host cache was utilized. Bonus points for figuring out when the test VMs were shut down…

So there it is, performance graphs showing that the host cache is indeed kicking in and getting a run for it’s money. Since this was a non-scientific experiment, I don’t have any real performance counters or metrics to base any sort of conclusion on. All I was after was to see if it came alive, and clearly it did.