I recently got a pair of new displays for the office, a couple of lovely Dell U2719DC’s. These offer USB-C connectivity, which is really nice, and makes it easy to connect my MacBook when I’m in the office.

Connected to one of the displays is a Logitech Z337 set of speakers with a sub, since there is no built-in speakers in these displays. The problem I had with that setup, is that macOS doesn’t let me easily differenciate between the two as they are named exactly the same, sometimes creating confusion as to which of them should be the sound output to the speakers. 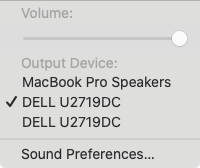 Some times macOS selects the wrong one when I connect, and I get no sound until I switch to the correct one. As far as I can tell, there is also not an easy way in macOS to rename a display, so it’s hard to know which one is which.

Of course, I could potentially connect an audio splitter cable, and connect both displays to the speakers that way, but I figured there had to be a way to do that in software. Luckily, macOS lets you do exactly that natively.

macOS Audio Midi Setup, which you can find in the Applications->Utilities folder is the key here. This little tool lets you, amongst other things, create what’s called a Multi-Output Device which is what I’m using it for. In short, an Multi-Output Sound Device is just a collection of sound devices, presented as one. By creating one of these, I can make a new sound device that contains both my displays, and use that as my output. That way, it does not really matter where the speakers are connected, as long as they are connected to either one of the displays.

That’s it! There are of course other use cases for this, like for instance connecting several headsets to a single Mac, or even several speaker systems.