I recently set up a new Veeam Backup & Replication v8 demo lab, and my intial small job that consisted of two different Linux VMs and one Windows Server 2012 R2 Domain Controller was chugging along nicely. I had one minor from the start though, and that was that file indexing consistently failed for the Windows VM. No big deal, but I thought it was strange at the time.

After all, the Linux VMs were indexed just fine.

Fast forward a few days, and all of a sudden Veeam B&R was unable to back up the Windows VM at all, failing with the following error:

Nothing had changed in my environment, no patches had been installed, no changes made to the backup job or the credentials used. I even tried deleting the job, this is a demo environment after all, and re-creating it, but with the same end result.

As the Access is denied message clearly states, this had to be related to permissions somehow, but I was using domain administrator credentials (again, this is a lab), so all the required permissions should be in place, and the credentials test in the backup job also checked out just fine. It has also worked fine for 5 or 6 days, so I was a bit baffled.

In the end, I tried changing from using User Principle Name (UPN) connotation of administrator@domain.local in the credentials for the VM, to using Down-Level Logon Name aka domain\administrator and retried the job. 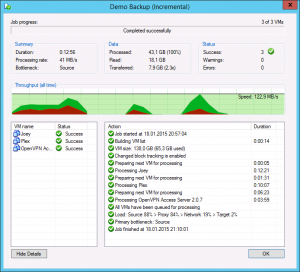 That did the trick, and it also fixed the indexing problems I’ve had since setting up the job in the first place.

According to this Veeam Community Forum thread this was also a problem in v7 and has something to do with how the Microsoft API’s work.

So, if your Veeam Backup & Replication jobs fail with access denied messages, and/or can’t index the VM files, check your credentials. They may work, but they might just be entered in the wrong format.