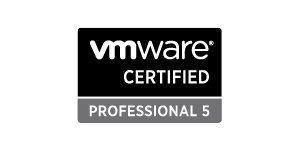 VMware has announced a Recertification Policy for it’s VMware Certified Professional program, effective as of March 10, 2014.

In short, it means that you are no longer a VCP(x) for life, but need to recertify every 2 years, unless you take a VCAP exam during the same period. If you do not upgrade your certification, your VCP status is revoked. For all the details, have a look at Recertification Policy: VMware Certified Professional.

I think this is a good move, and is on par with other technical certifications like ones offered by HP, Cisco and CompTia (A+). After all, we live in an ever evolving technical market where continuous change happens and if you are not able to keep current, the certification holds no real merit.

This change from VMware also means that as long as you recertify your VCP exam within the two year period, there will not be a course requirement to upgrade; schedule your exam and you are ready to go. Previously you would get a grace period, after a new major release of vSphere, where you could re-certify without having to attend a new class. With this change, you have two years, and that is it.

In a way, this also means that VMware will have to commit to major releases, with upgraded VCP versions, more frequently than every 2 years.

Looking at the last two vSphere releases, this seems to indicate a change in release cycles for major versions:

Remember, vSphere 5.5 is covered by the VCP5 (ok, there is a VCP510 and VCP550 version) certification, so if this policy was in place in 2011 when vSphere 5 was released, there would not be any upgraded VCP certification to take within the two year validity period.

Update:What if VMware had called an old VCP certification “retired” instead of “expired”, would that cause less outrage and emotion?