Is 2010 over already? I guess it’s true that time flies when your having fun! 2010 has been a great year for me, both personally and professionally. I won’t bore you to death with personal issues, but as far as professionally goes you’ll just have to bare with me.

2010 was the year I really feel that I got a lot of good work done, and some of that are really significant changes for my organization which is in a way better state IT wise now than in 2009. I can’t take credit for all that on my own, I have some very competent coworkers that are equally to blame/praise for the work we have been able to do in 2010. By the looks of it, 2011 will be even better! 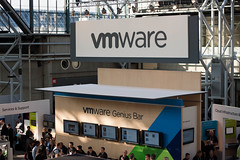 One major thing stands out when I think of what happened the last 12 months. VMworld Europe 2010. It still amazes me how important VMworld feels, even 4 months later. I met some amazing people face to face, finally, and that alone was worth the trip. You know who you are!

I had one, albeit pretty minor, public speaking job in 2010 where I did a walk-trough of my companies disaster recovery setup, based on, amongst other things, VMware vSphere and Veeam Backup and Recovery. I haven’t done any of that in a while, and it was real fun being asked to do it again. Hopefully there will be more opportunities to do more of the same, and by the looks of it I might even do a similar, but much bigger, gig again in the beginning of February 2011. More details to come.

I have set a lot of personal goals for 2011, and I won’t be listing them all here as some of them are pretty personal. But I do have a plan for finally getting my VCP4 sorted, and possibly also a VCAP-DCA if my employer gives the go-ahead. I have been neglecting these certifications for way to long now.

I do promise to keep posting on vNinja, and I really promise to finish off a series of posts when I start publishing them! Sadly I didn’t manage to get all my stuff sorted before the end of the year, but hopefully I’ll be able to finish the series I’ve started on pretty early in 2011.

vNinja saw a total of 32 posts in 2010, the first one in late July. This equates to about 5 posts a month, something I look to increase on in 2011. The visitor numbers have been amazingly good, and I hope to keep building on that as well.

And who knows, you might just hear more from me in 2011 than ever before. How do you like your bowl of vSoup?

While I can promise to meet all my goals for 2011, I can promise one thing: There will be no seppuku in 2011, neither physical nor virtual. I’m here for the long haul, like it or not.

Have a good new year everyone, I’m honored to have you as my readers and I’ll work hard to keep it that way throughout 2011 as well.