Guess what? With vSphere 8 comes vSAN 8, and with it a slew of improvements and even a brand new architecture option!

This new optional next generation architecture is built into vSAN 8, and going forward customers can choose which architecture to deploy:

This is the traditional vSAN architecture we are already accustomed to, with dedicated cache and capacity drives making up Disk Groups that vSAN enabled hosts can consume and share within a cluster. Available as both a hybrid (Flash+HDD), and as an all-flash solution.

A rather limited list of improvements for vSAN OSA in v8, but it was about time the cache device size was increased. 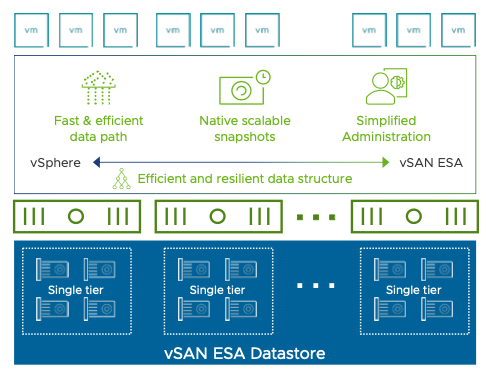 The new hotness, vSAN Express Storage Architecture (ESA), is a NVMe only option, which at launch requires a minimum of 4 NVMe devices per host. Gone are the concepts of cache devices and capacity devices, as well as the Disk Group concept. That’s right, no more vSAN Disk Groups in ESA, which helps lower the size of failure domains. Basically ESA is a single tier architecture, for all-NVMe based TLC storage devices.

vSAN ESA will only be available on ESA approved vSAN Ready Nodes (and VxRail models, I presume). This means that there is a separate ESA HCL. It also requires vSAN Advanced, or Enterprise, licensing.

At the time of announcement, there is no upgrade path from OSA to ESA, migration is done via vMotion/SvMotion to a new ESA cluster. The choice between OSA or ESA is done at time of deployment, and there is, at least not currently, no option to change a cluster from one architecture to the other.

This new architecture is managed in the same way as OSA, through vCenter and the Distributed Object Manager.

This new architecture enables quite an extensive list of new features and improvements:

Check core.vmware.com/vsan for the most up to date documentation on vSAN 8

It is obvious that going forward, the new vSAN Express Storage Architecture (ESA) should be the preferred choice for most deployments. The world has pretty much moved on from SSD’s to NVMe devices, and a new architecture model that makes better use of those devices is clarly a good idea.

The improvements that ESA promises, both from a performance (CPU usage and I/O) perspective alone makes it very interesting. Getting rid of the management overhead, and failure-domain issues, that comes with the Disk Group (cache and capacity devices) construct in vSAN OSA is also a welcome change.

Simplifying the design and implementation and at the same time improving performance sounds like a good deal to me.

Given that vSAN 8 ESA delivers what it promises, this is a very welcome and big upgrade from the vSAN we already know.